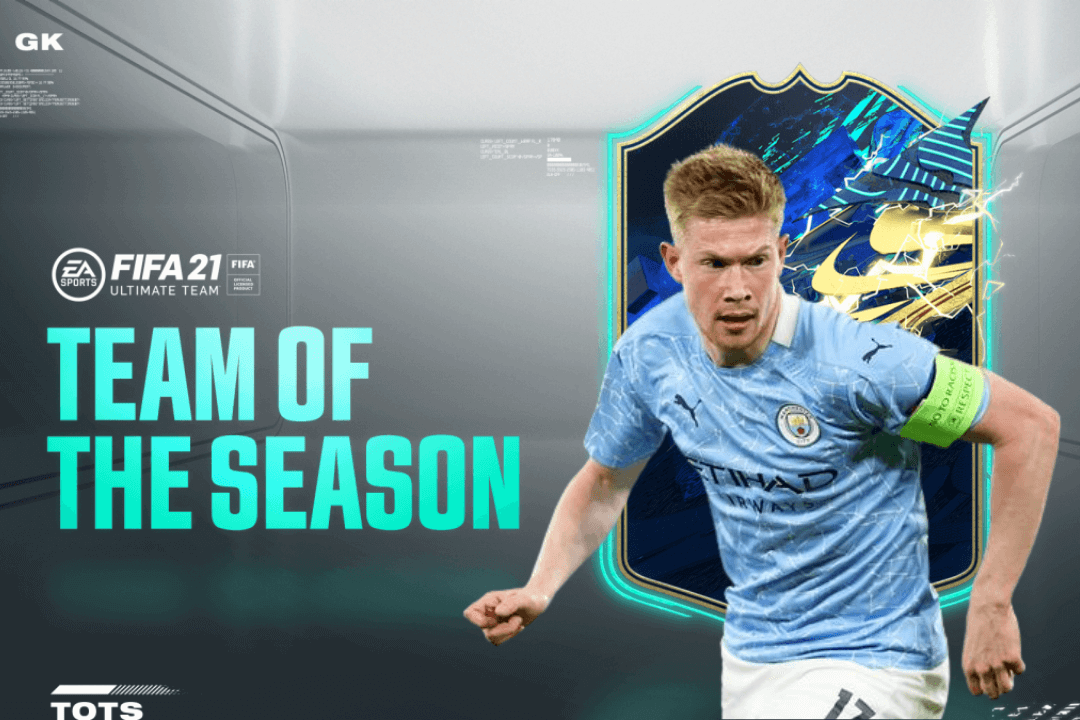 The time has come for EA to announce their annual FUT Team of the Season (TOTS) picks. TOTS’s are a staple of the Ultimate Team game mode and get promoted every year around the end of the club football season. Not unlike a hit TV show on Netflix, EA announce these teams one by one on a week-to-week episodic basis. The TOTS event celebrates the best and most consistent performers in all the biggest, most commercially popular leagues in the world—The Premier League, La Liga, Bundesliga, Ligue 1, Serie A, and many more top-flight leagues are included in this massive update. This article will specifically explore the Premier League TOTS as part of a series of blog posts covering this jampacked FUT event. Please scroll down to read more about EA’s Premier League TOTS as we delve into the good, the bad, and the ugly of this squad’s exciting and abundantly talented lineup.

Our first pick and perhaps the player that standouts the most in a group comprised of exceptionally talented and predominantly world-class players is Kevin De Bruyne. What can we say about this player that has not already been said. All his actions on the pitch radiate swagger, ease, and an air of effortlessness that is mesmerizing to watch. This season De Bruyne made a stellar comeback from the injury woes of last year’s Premier League Campaign, tallying a total of 9 goals and 17 assists in 38 appearances. Under De Bruyne’s exemplary captainship, Manchester City has attained unparalleled domestic success this season, winning a League Cup and being within one win of the Premier League title. On top of this, City still has the chance to round off their season in the most dramatic way by defeating Chelsea in the UCL final and being crowned champions of Europe. The fact that De Bruyne has been such an integral cog in this dominant and hugely successful Manchester City side speaks volumes about the quality of the season he’s enjoying. As far as stats go, TOTS De Bruyne has 97 rated passing, 93 rated shooting, which is excellent for a midfielder, and 93 dribbling. He is an outstanding player and easily one of the best midfielders in the entire game. The only caveat with this card—besides the insane price—is the noticeable lack of pace (83 rated). This rating would be serviceable if we were in month 1 or 2 of the FUT21 life cycle, but with all the crazy promo events and new releases, FUT players today have cards with a minimum of 90+ pace for almost every position.

There’s simply no denying the impact that Bruno Fernandes has had on Manchester United. His arrival in January of last year sparked the beginning of United’s unlikely return to form and gave the team. Fernandes played a significant role in helping the club rediscover its attacking football identity and its dominant style of play. This was the identity that had indoctrinated generation after generation of United fans, and that had since become a tall tale of the past since Sir Alex Ferguson’s retirement. When he first arrived in Manchester, Fernandes was an absolute revelation. Not only was he technically gifted, but he was revered because of his precision in the final third and how he perfected the details in decisive moments when he had to make an inch-perfect pass or thread the needle between a player’s legs and past the goalkeeper. Fernandes’ exceptional ball control and unrivalled decision-making in transition allowed him to thrive in his first half-season at United, scoring eight goals and assisting 7 in only 14 league appearances for the club. In those first five months, Bruno set such an incredibly high standard of quality for himself that some critics doubted whether he could consistently deliver that level of brilliance for the entire 20/21 campaign. Now, as we approach the end of the season, we can say with absolute certainty that he proved all the critics wrong. Not only was Bruno able to match the levels of last season, but he built on those stellar performances displaying additional dimensions of his game in the process. Bruno achieved new heights this season, scoring an impressive 17 goals and assisting 11 in 34 league appearances. Bruno’s TOTS card is just another iteration in a long line of special FUT cards with his name on them. EA has celebrated Bruno’s accomplishments with two TOTW cards, two POTM—player of the month—cards, and one game-breaking TOTY—team of the year—card throughout the season. While this special TOTS card comes just short of his incredible TOTY—click here to read more about the TOTY promo event—, it still has very impressive stats with 96 rated dribbling and 97 rated shooting and passing. Expect to shell out north of 2 million FUT coins for this card, as it is likely one of the greatest CAMs in all of Fifa 21.

Over the last five years, Rashford has cemented himself as an instrumental part of the Manchester United team and one of the Premier League’s most dangerous forwards. Off the field, Rashford is an inspirational figure who fights for the right causes and works tirelessly to improve his community and the lives of the less fortunate. Recently Rashford became the youngest ever recipient of a prestigious honorary degree from The University of Manchester in recognition of his spirited campaign to help combat child poverty in the UK. On the other hand, Rashford has been excellent on the pitch this season, fulfilling his footballing duties as United’s talisman goalscorer. In the 20/21 season, Rashford has contributed 20 goals and 15 assists in all competitions for the team. As far as FIFA goes, this TOTS Rashford card is a fantastic addition to any FUT squad, mainly because of his god-tier speed (99 rated), clinical finishing (93 rated), and fantastic strength on the ball (89 rated physical).

And the trend continues… That’s right, we’re choosing to highlight another player from one of the two Manchester clubs, and for a good reason. Ruben Dias has had a breakthrough season in the Manchester City backline. His strong and determined defending has impressed most pundits in the world of professional football. Dias and Stones’ center-back partnership has been the central element at the heart of City’s great strides and remarkable improvement from last season. Dias has somehow delivered on the hype and unsurmountable expectations that arose last summer when news broke of his 61 million pound price tag. His partnership with English center-back John Stones has been the central element at the heart of City’s great strides and remarkable improvement over last season. This lucrative partnership has allowed Manchester City’ defensive record to thrive and flourish into the best in the league. City has only conceded a mere 26 goals, which is less than any other team in the league by a country mile, with the closest side being Chelsea with 32 goals conceded. Key to this success has been Dias’ impeccable composure and positional awareness. No player on the City team has put in more blocks or tackles in the defensive third of the pitch than Ruben Dias. Unsurprisingly, his TOTS card—which is 94 rated overall—accentuates each of these strengths. The TOTS Ruben Dias card has ridiculous stats. To start, he has an outstanding pace rating for a defender (83), then he has superhuman strength (93) and exceptional defensive positioning (93). On top of this, he has a rating of 99 in all the following categories: reactions, composure, stamina, aggression, and shot power. In short, this card is entirely and utterly overpowered and worth your money considering the current price in the transfer market is only around 350k FUT Coins.

One or two players are probably going to get overlooked, but we want to give a special mention to the great players on this team that are selling at relatively affordable prices. Being that this is the TOTS promo—one of FUT21's biggest late-game events along with the 'Future Stars' and 'What If' promos—none of these players are going to be flat-out cheap. That’s not how these promo events work. That being said, it does depend on what you define as a bargain, and to make this list, we had to come up with our parameters to define the term. So, in this list, a bargain is any player that is worth 250k or fewer FUT coins.

In this jampacked TOTS, two cards fit the bill of a bargain player. The two players worth mentioning are Fofana and Luke Shaw. Shaw is a left-back that offers electric pace—91 rated—exquisite technical ability on the ball—88 rated dribbling—and an unwavering physical presence on the pitch—88 rated physical. On the other hand, Soucek is a dominant center defensive midfielder that can pick a pass (85 rated passing), win midfield duels (93 rated physical), and make last-ditch tackles to keep your team in the game (91 rated tackling). Both these players are being sold for decently modest prices, with Luke Shaw being worth about 240k and Soucek being worth around 65k, which is easily one of the best value buys you can find in the entire FUT21 market.

There is no denying this TOTS squad is riddled with quality and world-class talent wherever you look. You have three of the league’s most dangerous and prolific goalscorers Kane, Son, and Salah, in the attack. In midfield, there’s the dynamism of Marcus Rashford and Fernandes and the raw talent and finesse of Kevin Debruyne. And finally, this squad is complete with a speedy and powerful defensive line of Fofana, Dias, Cancelo, and Shaw. Put all the pieces together, and you’re left with a starting 11 that is well balanced and very challenging to beat.

Play Ultimate Team on our site! Now is the perfect time to hop in with the release of this new TOTS squad. Test your team against capable online opposition and immerse yourself in our vast and social FUT community. If you want to earn money playing FIFA Ultimate Team, look no further; click here to sign up for Game Champions (it's completely FREE)!